At the start of the 2022 winter sports season, the Ithaca College gymnastics team benefited from strong performances in its freshman class, with the young players taking a big step up the team and cementing their place on the roster for future seasons.

Head Coach Rick Suddaby said while the team typically sees production from its freshman athletes, the current class has taken a big step up in competition from previous freshman classes. He said it was something the team needed after graduating from four senior classes during the COVID-19 pandemic.

“Quite often you’ll have kids who will see action and be competitive right away,” Suddaby said. “But we had so many freshmen and we had lost so many because of diplomas and COVID[-19] that we really needed them to intervene and they really did. And so it was really good. So they are ahead of a normal freshman class.

The roster has 23 gymnasts in total, including 12 freshman women. At the start of this season, Suddaby said he was confident the new gymnasts joining the team would stand out from the other freshman classes.

Once the team started training, he could see where they were at with their performance and knew who would stand out on the team.

“Coming in, I had watched the video and that kind of stuff, I could see where they were at and it was just a matter of projecting how well we could prepare them,” Suddaby said. “We were able to prepare them, but we have quite a few strong points. Jillian [Freyman] stands out, Nicole [Lonski] stands. She’s been in and out of injury. And so she brings her back, but we really missed her when she was gone. Caitlin Pellegrino has been a very good performer on the court. And Marlena [Bailey] is solid on the bars. So Marlena and Nicole, they really build our bar team.

The freshman class has shown their competitive ability throughout the season. Skye Cohen was selected as the all-around gymnast of the week for Feb. 14 for her performance at the Cornell Quad Meet, where she set a Division III season-best score of 37.9000 points. The score was just 0.325 off the program record, set by Lindsey Mazer in 1998. 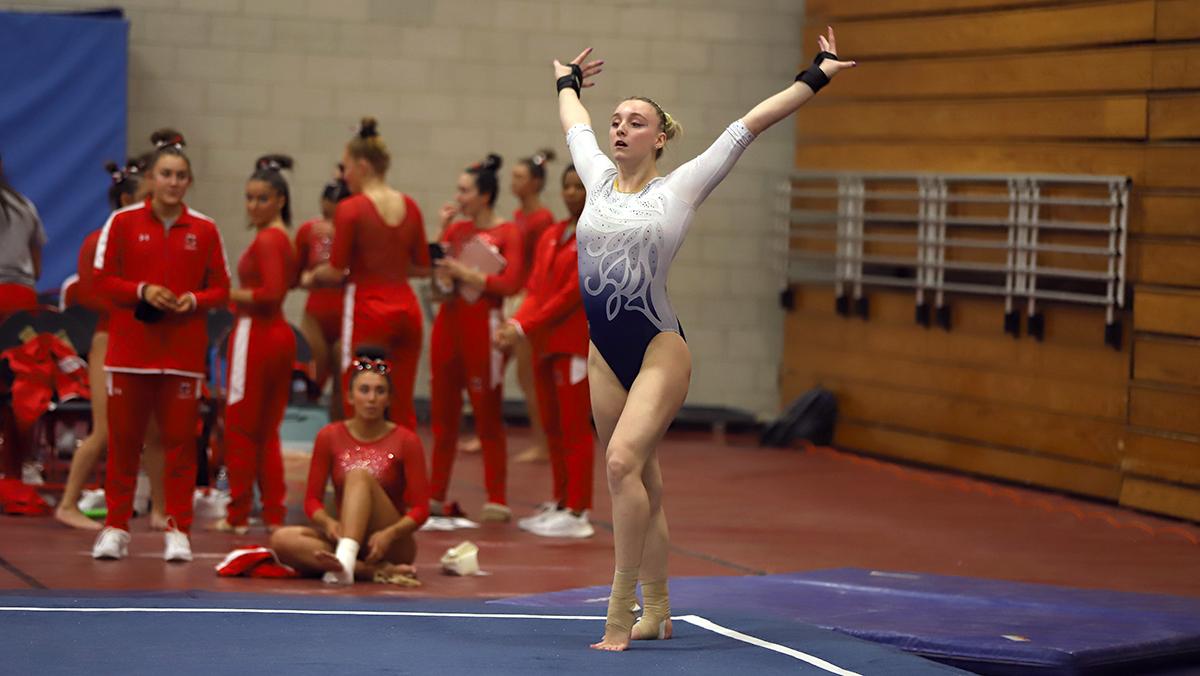 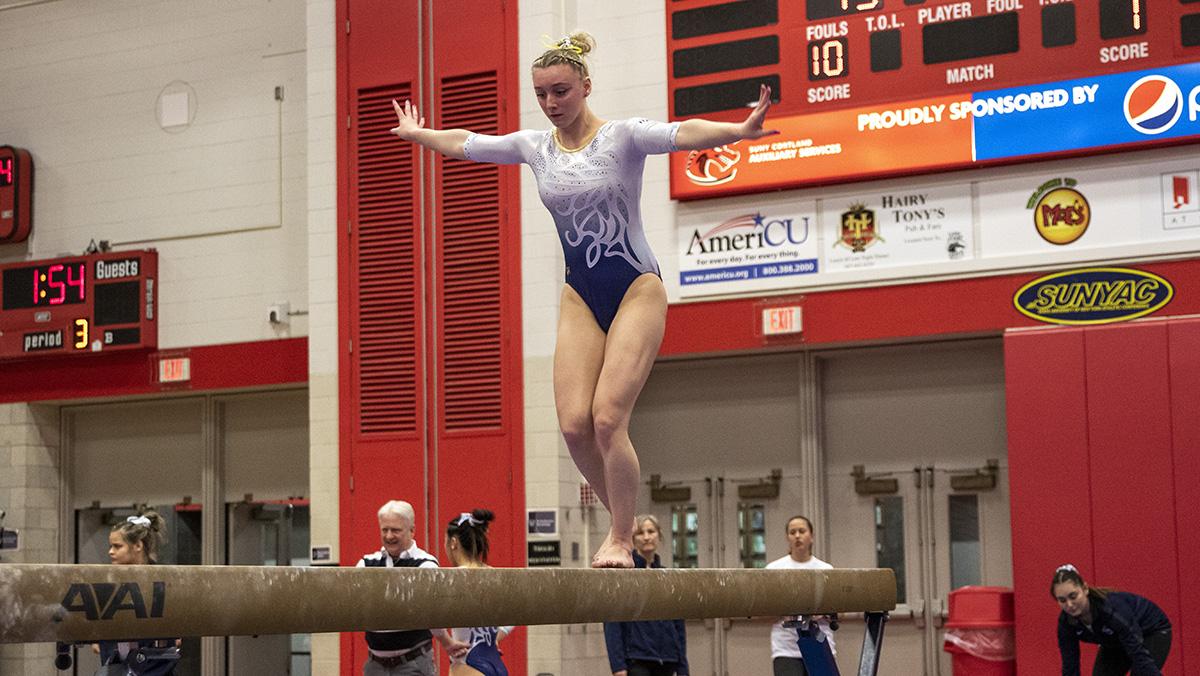 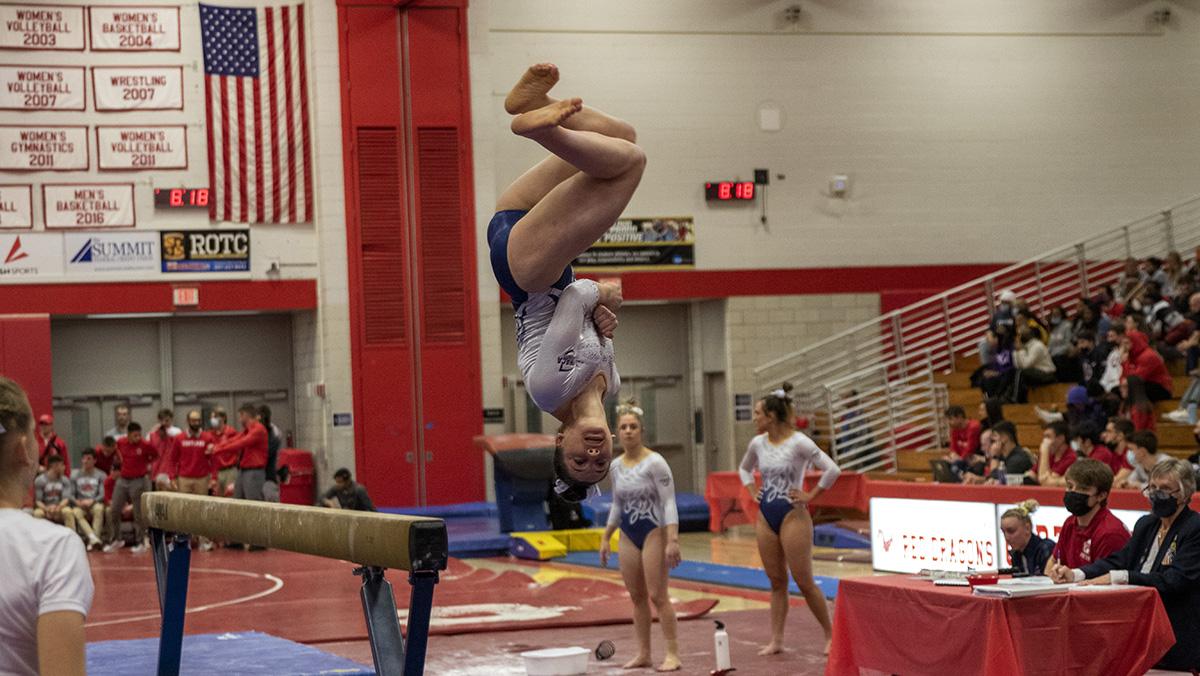 Lonski scored a 9.750 on the uneven bars in the February 16 Rumble and Tumble meet, the highest score of any gymnast. The score helped the Bombers win three of four events.

Lonsky said that despite an ankle injury she suffered in late January which limited her ability to compete, she has found significant growth in her competition thanks to the strong bond the team has in training.

“I really think working with my teammates has been very helpful, we’ve all strengthened each other,” Lonski said. “I also think our workouts are really fun and fun to follow and practice. So it’s very motivating to have all these girls in training.

Freyman said she also found confidence heading into the season by gaining support from the upper class members of the team, from performing routines with them to the moral support they provided to the freshmen during the season.

“There are a few girls that I usually practice balance beam with,” Freyman said. “[Junior] Nya Pauldon is really great. We usually try to do our routines together and hold each other accountable. And then the two seniors are absolutely fabulous leaders. They make sure everyone feels encouraged and supported no matter what day they are having or what day the rest of the team is having. They really try to elevate us every day we’re in the gym and every time we do an event in a competition.

In his first collegiate competition on Jan. 15, Freyman posted a 9.325 on vault, tied for second on the team. She also led the team with a floor exercise of 9.575 on the same day. Since then, Freyman has been no stranger to leading the Bombers, outscoring her teammates nine times this season.

Freyman said she wanted to focus on her balance beam routine before the start of competition. She used the confidence the upper classes gave her to post a personal best 9.750 out of 10 at the Cornell Quad Meet. To get there, she said the work of the coaching staff has helped her make an impact this season.

“I did a lot of routine numbers,” Freyman said. “And then the coaching staff made sure we did a lot of practice matches, and together that helped a lot to prepare me and most of the team.”

For Suddaby, the goal of working hard with his players in training, in addition to preparing them for competition, is to condition freshmen to take on leadership roles on the team so they can better lead their class and future classes.

“We teach leadership at all levels, from freshmen to seniors, we teach that they lead by example,” Suddaby said. “So when these kids train with the other kids in their class, or even with the upper classes, they train like them and they all do well.”

Rookie Dallas Rachal, who suffered a knee injury earlier this season, said Suddaby was instrumental in her return to competition, pushing her to do a little more. every day until she’s ready to come back.

“He definitely played a big role because I was very nervous about coming back,” Rachal said. “So he helped me figure out what I needed to do, starting with drills and working my way up to the vault. So he was definitely a key factor, asking me, ‘Hey, are you feeling okay? Hey, let’s try this and see if we can push a little harder. If you can take it, let’s go a little further.

Lonski also spoke about the importance Suddaby has with the team, working with the team during practices and making sure everyone is doing their best to prepare for competition. The coach’s advice helped the team post a 9-7 regular season record this winter.

“Coach Suddaby was very helpful in motivating us,” Lonski said. “He gives us corrections and makes practice a fun place. It definitely brings life to the gym and it’s a lot more exciting to go and train every day.

Suddaby’s leadership has helped the players gain more confidence throughout the season. The team scores reflect the improvement of the gymnasts during the season. His scores have especially tended to increase since the first meeting of the season.

Freyman said senior management helped her acclimate better to varsity gymnastics, where competition is more team-focused rather than individual performance, and made her more comfortable with her role within the team.

“It brought me a lot [of confidence]”, Freyman said. “I was definitely very nervous about going to college just because it’s so different from the gymnastics I did growing up. But after seeing my performance and the team’s performance in recent competitions, I’m really confident in the season we’re having right now, and the seasons we’re going to have the rest of my time here.

Although it’s been a positive season for the team’s freshmen, Rachal said she knows she still has room to improve. She said she wanted to focus more on her physical preparation to expand her competition, which she wanted to do this season before her knee injury stopped her.

“Before next season, I absolutely want to have my floor [routine] back to where he was,” Rachal said. “And also my bars and beam. I’d like to start training them again to the point where I’m competitive for rosters. So that’s my goal, just to get everything back to where it was before I hurt my knee.

Seeing how this freshman class has remained competitive this season, Suddaby also looks to the future. The team will only graduate two seniors after the season, Amelia Bailey and Julia O’Sullivan, but both have contributed heavily to the program.

Suddaby believes the freshman class can continue to grow into the foundation of a strong team. He thinks they can help the team become a powerful program soon.

“I’m confident,” Suddaby said. “It’s my 35th team, so I know we’re going far. It’s kind of a question of how quickly we do it. We’re going to see All-Americans. we will push [to be] the best team in the league.