The 2022 gymnasts from the University of Wisconsin at Oshkosh have shown the ability to pick themselves up when knocked down.

The team hopes to turn that strength into a National Collegiate Gymnastics Association (NCGA) championship when they meet on Saturday, March 26 in Ithica, New York.

“Two years ago we won our first conference championship since 1996, and then it all stopped,” recalls Lauren Karnitz ’06, ’12, gymnastics head coach. “It was absolutely heartbreaking. It was heartbreaking as a coach but also as an alumna. We have now been able to reclaim what COVID has taken away – the opportunity to compete in a national championship at Ithica College with a team who absolutely has an opportunity to win.

The Titans won the 2022 WIAC Championship on March 5 ― his second in a row ― at UW-Whitewater (pictured above), and Karnitz was named 2022 WIAC Coach of the Year.

Four UWO athletes have been honored with the WIAC All-Conference and have been key contributors this season: 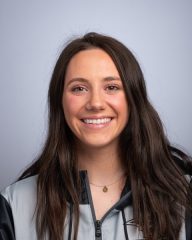 Emily Buffington, a sophomore from Huntersville, North Carolina, is a conference winner on the uneven bars and vault and is a starter on floor exercises. Buffington won the 2022 WIAC Gymnast of the Year award.

Emilie Gilotsenior from St. Peters, Missouri, ranked second in the conference on vault, was a starter on bars and was a three-time All-American.

Rahdea JarvisBrookfield senior, finished second in the conference on bars, starter on floor exercise and vault and passed All-American.

Trinity Sawyera junior from Alpharetta, Georgia, was fourth in floor exercise in the conference, fifth on bars and a former All-American.

Karnitz mentioned the depth of the squad – the seventh and eighth place finishers who can’t compete are just as talented as those in the lineup. It pushes athletes every day to improve and if someone has to miss out due to injury or illness, there is someone else equally talented who can step in.

“It’s the very essence of a team – everyone is working towards a common goal of being the best they can be to have the opportunity to win national championships,” she said. 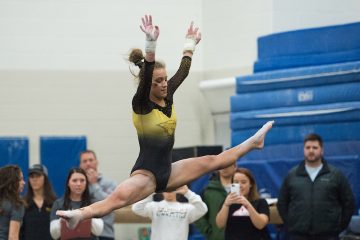 Baylee Tkaczuk competing for the Titans in 2018.

Baylee Tkaczuk ’20, a former national champion and All-American gymnast, was a senior in 2020 — the year they won their first conference championship in 24 years.

COVID-19 wiped out any shooting that year at the end of a storybook – an NCGA championship.

“It was absolutely heartbreaking to hear after the conference, in practice one day, that we would be done with the season. It was really, really hard for me to accept that I was done with my career as a gymnast and that my team that worked so hard failed to win national championships. I think one of the worst things for me was that I didn’t know that I had finished my last routine when I have done.

The 2021 championship was also canceled due to the pandemic.

Fast forward to 2022, and Tkaczuk, who graduated with a degree in psychology in 2020, is a nursing student while working on an accelerated bachelor’s degree option at BSN from UWO – and is an assistant coach for the team. Although her ending in gymnastics was not what she imagined, she is grateful for an “incredible experience at UWO and for the career that I had. I’m also grateful that I ended my career on a high note, even though I didn’t know it at the time.

Tkaczuk has picked herself up and is helping today’s team do what her team didn’t get a chance to do.

“This team right now is so talented and has worked so hard for this competition. I’m so happy that we can finally go to New York and show everyone what this team is made of!

Tkaczuk said one of the team’s “best traits” is to stand together as a unit and move through an encounter without worrying about anyone or anything else.

“They are hungry for this national competition and they have all the tools to win,” Tkaczuk said.